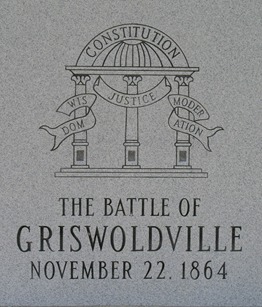 ​​The Battle of Griswoldville happened on November 22, 1864 and was the only infantry battle opposing Gen. William T Sherman's March to the Sea from Atlanta to Savannah.  Just east of the town of Griswoldville about 4300 Georgia Militia under Brig. Gen. Pleasant Philips fought 3000 Union soldiers under Brig. Gen. Charles Walcutt and Col. Robert Catterson after Walcutt was wounded.  The battle ended at sundown without a surrender, but the Union army held its ground and the Militia retired with about 51 soldiers killed and at least 422 wounded.  About 13 Union soldiers died, 79 were wounded, 2 were missing.  The battle is considered a Union victory, but the bravery of the Georgia militiamen who charged repeatedly into heavy fire, many them youth and elderly men, is not forgotten.

A Field of Honor At Last
For a Ragtag 1864 Militia
Your Peachy Past
An Overview of
The Battle of Griswoldville, GA
November 22, 1864

by
John Wayne "Duke" Dobson
Griswoldville:
Do We Tell The Truth?